Ever wanted to tell other FileMaker users you changed an appointment or ask someone to get out of a record? Now you can with Troi Activator Plug-in! The Activator is a very powerful tool for triggering scripts across the network, even over internet!

This allows you to:

The Activator Plug-in has a built-in HTTP Server, which will trigger a script when data arrives. This can be implemented with the function Actr_StartHTTPServer or the Start HTTP Server script step. There are several ways in which you can use this functionality:

Script triggering via a URL

With Troi Activator Plug-in you can trigger a script with a URL, using the HTTP GET method. Use a URL like this:

You can also add waitForResponse=yes to the triggerscript.html URL, for example likes this:

In the triggered script you can then specify the response text with the Actr_SetHTTPResponse function or Set HTTP Response script step. This sets the (HTML) text which is returned to the remote client in response to the HTTP URL request sent to the Activator Web Server.

The HTTP server also has an echo function. This will echo back the HTTP request, including the method and headers used. This can help with debugging an HTTP problem. Use this functionality for example to test HTTP requests with custom headers you want to send with Troi URL Plug-in.

Activator Plug-in can trigger silent events and background events. This allows you to keep the main application free, while the background FileMaker application, for example a runtime application, does some time consuming work on data.

Troi Activator has a control function to disable all script triggers, so you can do maintenance on the database.

The possibilities are only limited by your imagination!

You are free and invited to test the plug-in before you pay. Troi Activator Plug-in is fully functional in demo mode, it will only stop working after 2 hours of testing. Download your copy here.

Troi Activator Plug-in 8.0 was tested and made compatible with Claris FileMaker Pro 19.4 and initial support was added for the upcoming release of Claris Pro. The plug-in was also tested and made compatible with macOS 11.6 (Big Sur) and macOS 12 (Monterey). The minimum supported macOS version is now macOS 10.14 (Mojave). On Windows the plug-in was tested and made compatible with Windows 10 version 21H2 (November 2021 Update) and Windows 11.
In this version we improved the Upload Server functionality for text posted to the url “/posttext.html”: you can now allow any text to be uploaded by adding the switch “-AllowAnyPostedText” when starting the HTTP server. If you don’t add this switch, only text that is correctly formatted will be handled and trigger a script.
We also fixed a few smaller issues both on macOS and on Windows.

Please see the Version history below for a complete list of changes in this and earlier versions.

NOTE Only steps that perform an action have been added as a script step. Functions that have no side effect (like for example Actr_GetIPAddress) are only available as an external function.

We offer the following licenses for Troi Activator Plug-in:

server/web license: this license registers the plug-in for use on FileMaker Server and FileMaker Server Advanced. It does not provide any client-side functionality. You only need this license if you want to use the plug-in in server-side scripts and in web published databases. It has no user limit.
Go to the server-side plug-ins page for more info.

Below are a few things our users had to say about Troi Activator Plug-in:

“I needed a reliable way to get FM6 to ‘send’ data to FM7. I was considering XML and CWP calls, timed export/imports every minute, etc. But someone suggested Troi Activator and I can’t speak highly enough of the solution. It was simple, simple, simple to set up on both sides of the FileMaker divide. And it works across the network with the most incredible behind-the-scenes speed. What I ended up doing was setting up a ‘bot’ machine that runs FM7 with the plug-in, and then the four FM6 machines that need to communicate with 7 also have the plug-in installed. I guess I was expecting some kind of glitch like screen flash or momentary system freeze or something when the plug-in was activated, so I was very impressed — awed actually — that I saw my local copy of 7 (over a WAN connection to the client) updated only a second after the plug-in script was activated on 6 to the 7 bot. Up to 6000 characters of text can be sent along with the plug-in’s script trigger, so no unreliable exports/imports of data were required.
I highly, highly recommend this solution if anyone else needs to do such a thing…
Thanks,”
Howard Schlossberg, FM Professional Solutions

“Originally we purchased the developer license of the Activator plug-in just to be able to trigger scripts on a field change. To our surprise, the script scheduling and ability to trigger scripts on a remote machine are just as valuable to us now. This is a plug-in that a FileMaker developer would be foolish to live without.”
Shawn Hogan, Lead Engineer at Digital Point Solutions

“Thank you! Thank you! Thank you! Thank you!
Peter;
Very rarely do I go to any effort to write someone a thank-you note when I purchase their software. However, this time, it certainly warrants it.Your plug-in, “Activator” has saved me – literally – hundreds of hours and an immense amount of heartache in my runtime solution, which is a massive relational system for managing flight operations at one of Canada’s busiest airports.
The activator script allows me to simply forward requests through to other systems where they can be parsed and acted upon, without having to contend with establishing relationships, multi-user issues, or any of that stuff.
Thank-you Soooooo much for this plugin!”
Stephen Grant, Toronto, Canada

“Great work Peter! What will you think of next?!”
Clint Roberts, Senior Technical Editor for ISO FileMaker Magazine.

“We just heard about and started playing with the Activator Plug-in. It looks great. Once again you’ve provided the FileMaker community with a tool that empowers us to create innovative solutions to data management challenges. Our heartfelt thanks and congratulations to you and your team. Your fine work is appreciated.”
Sean Branney, DataEmporium.Net.

“This plug-in is fantastic. And as usual from Troi it works really well and comes with excellent examples.”
review from Paul de Halle on VersionTracker.

We are still collecting more comments. If you have any remarks on the Activator Plug-in please send us your comments. Thanks! 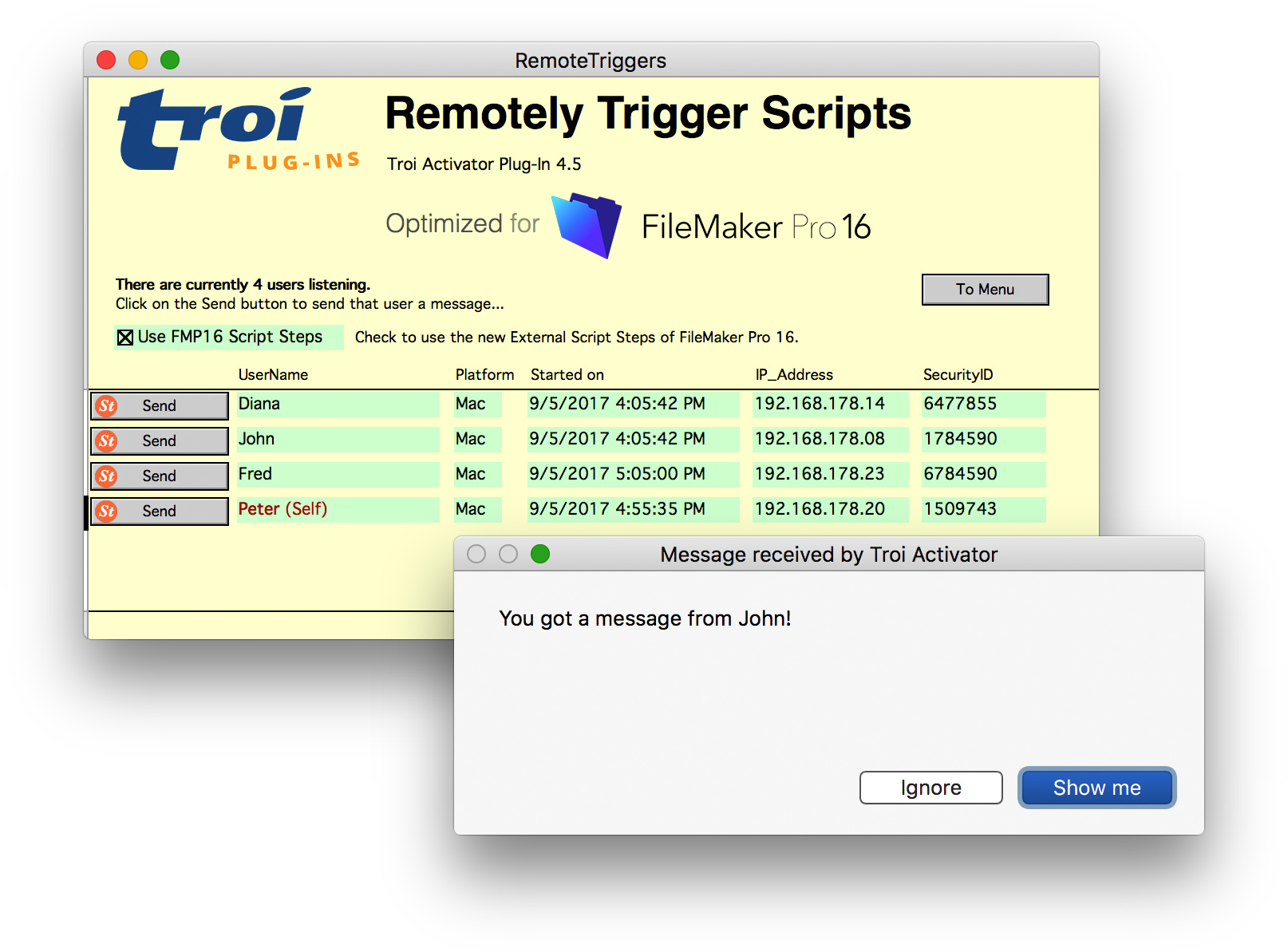 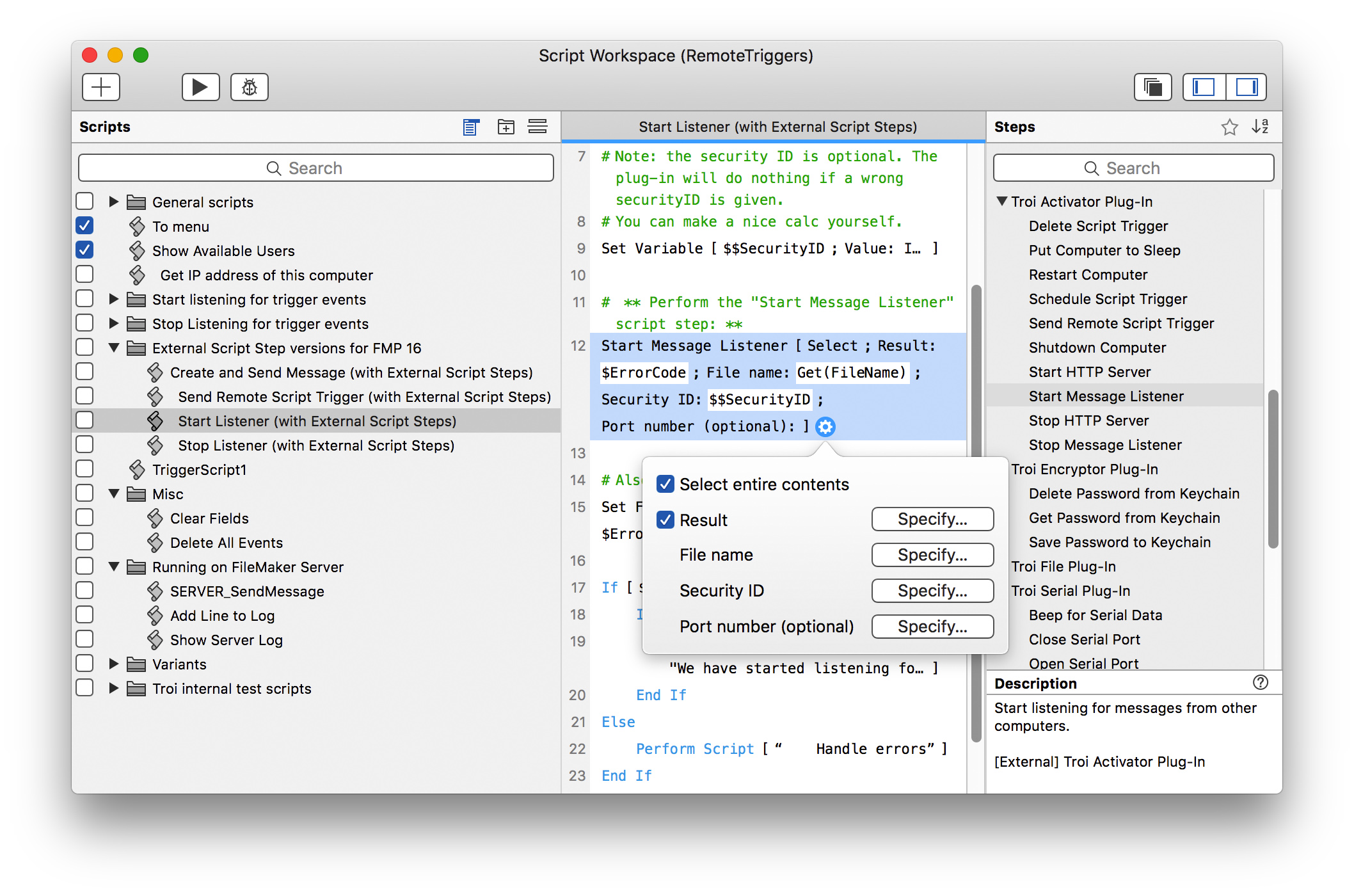 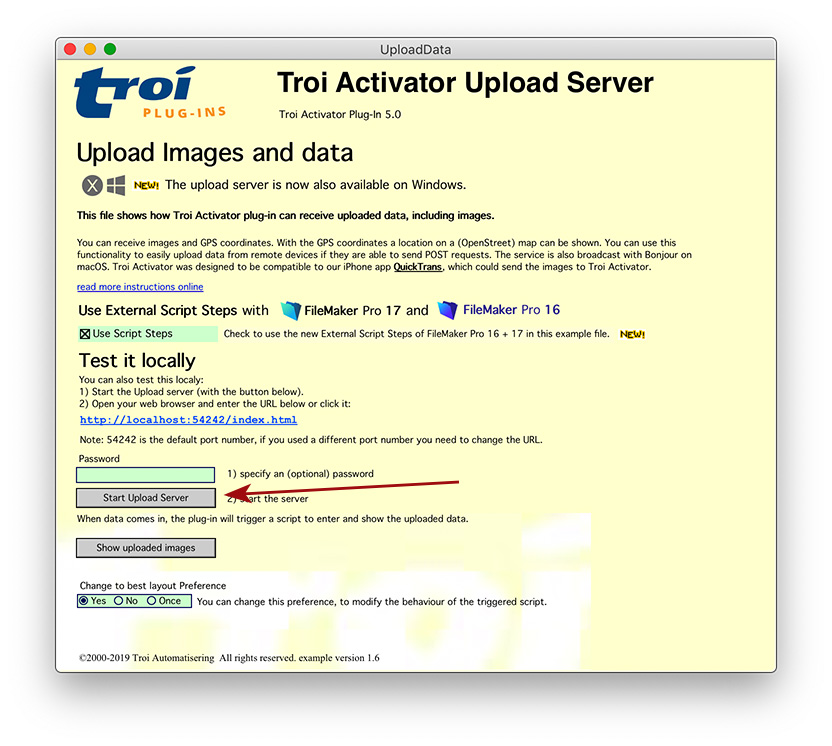 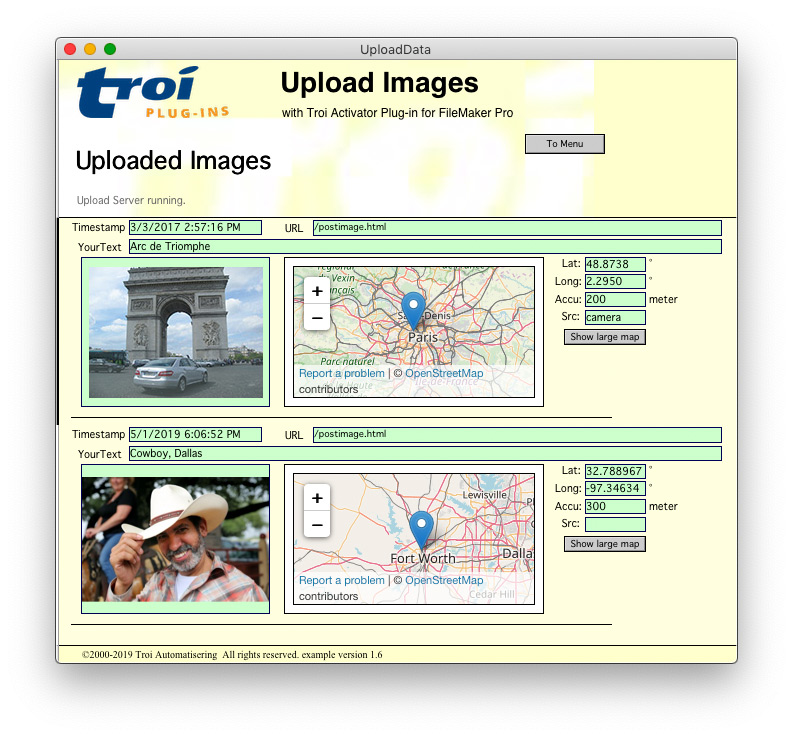 Activator Plug-in FAQ
See a list of Frequently Asked Questions about this plug-in.

Activator HTTP Server
Read how to use Troi Activator Plug-in’s built-in HTTP Server for triggering scripts from a URL.

Trigger FileMaker Pro scripts across the network, even over internet!