This plug-in adds encryption and encoding functions to FileMaker Pro. With Troi Encryptor plug-in you can make sure information can only be read by the persons you want. With this plug-in you can encrypt fields using the powerful 256-bit AES encryption scheme, so that your sensitive data is secure.

Troi Encryptor Plug-in is a very powerful tool for securing your FileMaker data, exporting or emailing your data without risk and importing safely back into FileMaker. With the plug-in installed you can do all this from within FileMaker:

With the Encryptor Plug-in you can encrypt fields using the powerful AES encryption scheme, so that your sensitive data is secure. This function will produce text that looks like this:

So can you read this? =)
The Encr_EncryptAES function will use AES-256 bit encryption by default. This version stays compatible with older versions though, which used 128-bit encryption: you can still use the 128-bit encryption scheme, by using a switch.
The Encr_DecryptAES function will automatically detect if data previously encrypted with Troi Encryptor Plug-in is AES-128 or AES-256 and decrypt the text automatically. You don’t need to change the scripts or add any switches for this to work.

Exchange encrypted data with other systems

The Encr_GeneratePassword function generates a strong, random password with a specified length. You can check the strength of a password with the Encr_GetPasswordStrength function. The plug-in allows you to store passwords in the keychain and retrieve and delete them later, all directly from FileMaker. When you save a password into the keychain, you specify the name of the account (or user) associated with it, and optionally an extra ID, which will help you distinguish between different passwords for the same account. As the keychain is unlocked when the user logs in to the operating system, the password can later be retrieved from it without the user needing to enter the (keychain) password. You can then use the retrieved password to decrypt text in a field, for example with the Encr_DecryptAES function. A third function allows you to delete previously stored passwords from the keychain.

You can compress text using the ZLIB compression.

With the SafeAscii function you can create data that can be sent safely over internet, for example via email. It will convert fields that contain higher ASCII, into a format that contains lower ASCII only. For example the text: “•Günther and Børg” will be coded like this:
%Troi SafeAscii v1.0
.VG.Pnther-Pand-PB/>rg
%End SafeAscii v1.0
This can be decoded again, to recreate all the original higher ASCII characters. More importantly, if you use this function on encrypted text it will also be converted to a format that is safe to send over internet.

Export and import data without risk

The plug-in has a function ShortSafeAscii, which is a variant of the SafeAscii function. With this you can export any text field, including encrypted data, to an export file.

The plug-in has a generic code function, which makes it possible to encrypt a field with the key as the parameter in FileMaker. This opens up the possibility to decrypt without the need for a script.

Of course much more is possible. The best way to see if it can help you is to try it out!

You are free and invited to test the plug-in before you pay. Troi Encryptor Plug-in is fully functional in demo mode, it will only stop working after 2 hours of testing. Download your copy here.

Troi Encryptor Plug-in 7.0 is a major release which adds compatibility with Claris FileMaker Pro 19.3. The plug-in now runs natively on Apple Silicon: we made the plug-in a Universal binary by adding code for the arm64 architecture of macOS. The plug-in was also tested and made compatible with macOS 11 (Big Sur) up to and including 11.5.
On Windows the plug-in was tested and made compatible with Windows 10 version 20H2 (October 2020 Update) and version 21H1 (May 2021 Update).

See the Version history below for a complete list of changes in this and earlier versions.

NOTE Only steps that perform an action have been added as a script step. Functions that just manipulate data and have no side effect (like for example Encr_EncryptRijndaelAES) are only available as an external function.

We offer the following licenses for Troi Encryptor Plug-in:

server/web license: this license registers the plug-in for use on FileMaker Server and FileMaker Server Advanced. It does not provide any client-side functionality. You only need this license if you want to use the plug-in in server-side scripts and in web published databases. It has no user limit.
Go to the server-side plug-ins page for more info.

Below are a few things our users had to say about Troi Encryptor Plug-in:

“Peter,
I just wanted to thank you for the fine work you and your firm does. Your products are quality, error-free, and very useful. As FMP users for 20+ years, and non-programmers, we find your work to be so beneficial and time saving. We love your “can do” attitude and your company culture of high excellence in service.
Best wishes,”
—R.K.

“Thank you for developing such a good software, I´m very happy to use your Filemaker plug-ins which are 100% error free….. at least for me, Thanks again.”
Victor Barrera

We are still collecting more comments. If you have any remarks on the Encryptor Plug-in please send us your comments. Thanks! 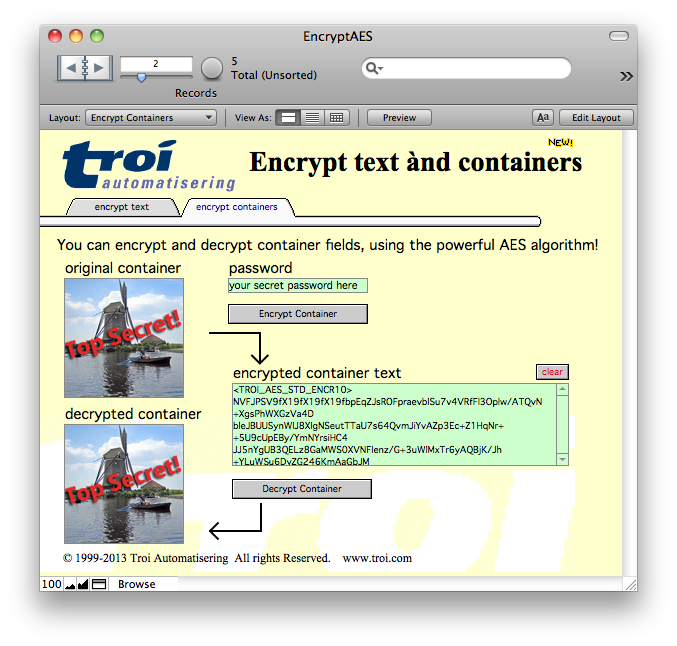 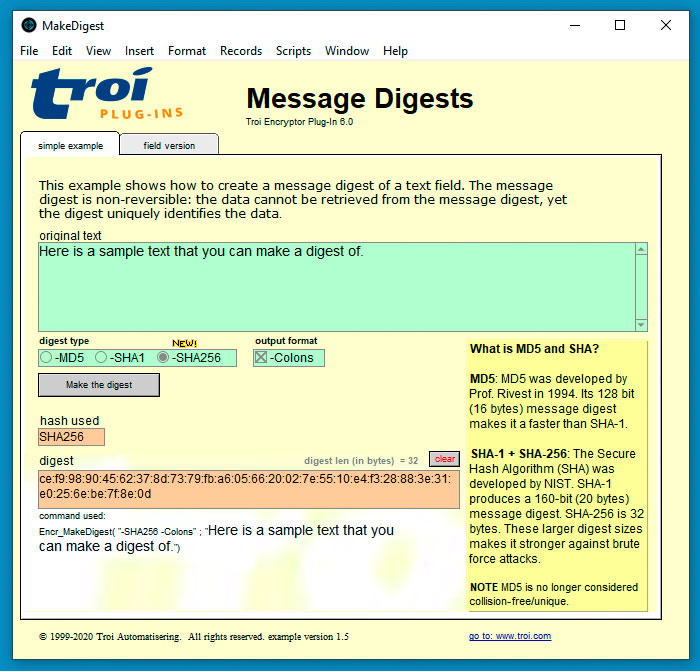 Encryptor Plug-in FAQ
See a list of Frequently Asked Questions about this plug-in.