Great features for handling text in your FileMaker database

With the plug-in installed you can do all this from within FileMaker:

Troi Text Plug-in’s spell checker can be configured completely from the database with calculations. You can specify a custom spelling (language) per database or even per text field, all driven from a script or a calculation. You can also specify to ignore words you or your company might use.

With Troi Text Plug-in you can get XML nodes out of XML formatted text and parse the info into separate fields in your database. You can get the contents of the nodes and child nodes and the attribute data of the nodes.

The possibilities are only limited by your imagination!

You are free and invited to test the plug-in before you pay. Troi Text Plug-in is fully functional in demo mode, it will only stop working after 2 hours of testing. Download your copy here.

Troi Text Plug-in 5.0 is tested and made compatible with Claris FileMaker Pro 19.4. The plug-in now runs natively on Apple Silicon: we made the plug-in a Universal binary by adding code for the arm64 architecture of macOS. This version also adds compatibility with Windows 11 and macOS 12 (Monterey).

See the Version history below for a complete list of changes in this and earlier versions.

NOTE Only steps that perform an action have been added as a script step. Functions that have no side effect (like for example TrText_ANDText) are only available as an external function.

We offer the following licenses for Troi Text Plug-in:

Below are a few things our users had to say about Troi Text Plug-in:

“Troi Text Plug-in is one of the most useful plug-ins on the planet.”
Robert J. Cummings, www.dbmscan.com

“I was totally stumped. I had to create a survey report listing totals of items checked in a Value List field. The field also had the “Other…” box checked so our value list could change at any time. I knew I could create a looping script to get a list of all the values in each field then go back thru and do a count for each value then put this data in a report blah blah blah… Which equals slowwwwwwwww.
I just knew there had to be a better way. I was using the Troi Text Plug-in to build my list in the above scenario, so I knew I was on to something. Then I took a look at the Book Index example provided with this gem of a plug-in. Awesome!!!
Using this template I was able to create my reports. The reports took seconds to calculate. If I didn’t have to deal with the “Other…” option my reports would only need to be built once and would be dynamic.
Thanks for your excellent examples.”
Jeff Yurka, Real Mac Solutions

“I just went through the once-tedious chore of getting related data processed for a client of mine. This chore is now an amazingly simple task! The solution? Troi Text Plug-in. It’s a Godsend. This plug-in allows you to create JUST ONE calculation field that automatically concatenates all the text from multiple fields in a portal! Ta-da! Thank you Peter Baanen! :)”
Scott Rose, President ScottWorld, FileMaker Pro Experts Since 1992 http://www.scottworld.com

“All Hail Troi-Text Plug-in (and FAXTool)!
I just wanted to relate to you our latest application of the Troi-Text plug-in. I’m using this butt-saving tool on a daily basis!.
We recently built a press-release distribution system for a Massachusetts organization to send FAXes and eMails to more than 300 newspapers in the state, regarding recycling programs in 351 towns. Since each newspaper’s readership area covers anywhere from 1 to all 351 towns, we built a relational system to manage this quite easily.
Each newspaper receives either an eMail or FAX, with a personalized cover letter/text, and a columnar table of data about recycling for all the towns only in their readership area.
Not a minor complication, we wanted to send only one eMail or FAX to each unique eMail or FAX destination, even though some newspapers share the same FAX or eMail address. We used the Troi-Text plug-in first to list all the newspapers in the ‘To’ line of the letter.
We built parallel functionality, all facilitated with the Troi-Text plug-in. FAXing (using FAXTool) was not difficult, since we simply FAXed a report layout of the related town data records for all towns associated with each of the newspapers included in a single letter.
We wanted to send a text-only press release (no attachments) that approximated the printed FAX, and were successful in converting the columnar report into monospaced text format using the Troi-Text plug-in.
We used various calculations to produce a monospaced, fixed column width text string for each line of the columnar report. Then we used the Troi-Text plug-in to gather and sort all the related file lines into one huge text field, along with the text of the letter, and sent that to our eMail client from FileMaker Pro.
Remember, since each newspaper can cover several towns, and some newspapers share an eMail address, we wanted to include those overlapping (duplicate) towns only once. We can do this on a printed/FAXed report using a summary part, and were able to reproduce the effect using the unique lines function of the Troi-Text plug-in.
It’s proven to be quite reliable, and doesn’t ‘choke’ on the fairly large number of records and huge text block that gets generated for some destinations!
I have, however, found the extremes of its capabilities. At one time I attempted to use the plug-in to create multi-key relationships which in turn were used to facilitate another dependent troi-text calculated result. Here, the plug-in choked and misbehaved, so that approach wasn’t feasible.
Once again, “Good work” and thanks.
Sincerely, Erik.”
Erik Wegweiser / Intelligent Database ( http://www.ichizen.com ), FileMaker Pro Developer, Consultant – Member, FileMaker Solutions Alliance

We are still collecting more comments. If you have any remarks on the Text Plug-in please send us your comments. Thanks! 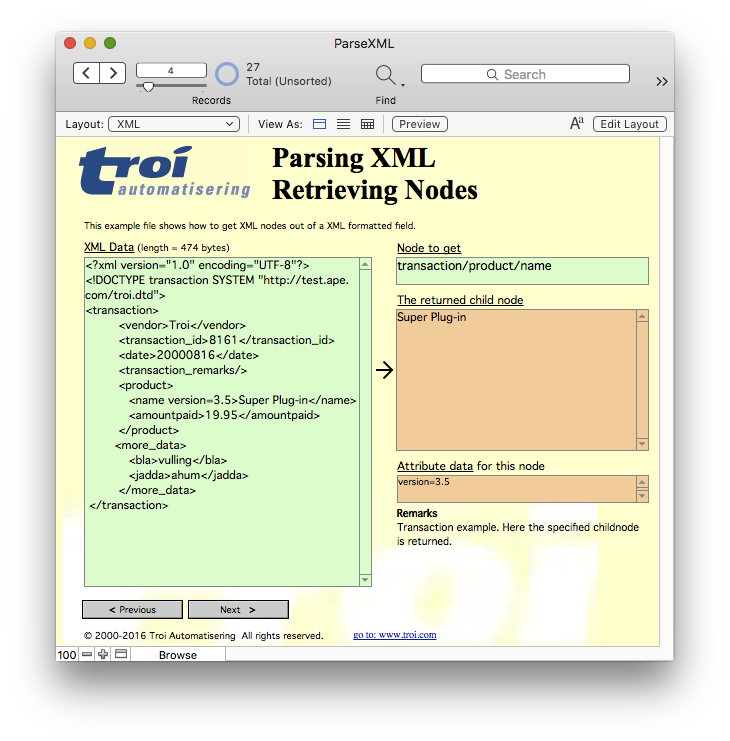 Can you parse out XML data in FileMaker Pro in one step?
Yes, you can. Read here how.

Deal efficiently with text in your FileMaker Pro database!