Troi Dialog Plug-in is a very powerful tool for displaying all sorts of dialogs in FileMaker Pro. The text of the dialog and of the buttons can be created dynamically by using a calculation.

Give database users the precise feedback they need

Show dialogs with variable text and up to 4 buttons

Let a user input text through a dialog

Show a dialog with up to twenty input fields, where the user can type text or a password (no need for a special bullet font to be installed!), choose an item from a pop-up list or mark a checkbox. All input fields can be filled with pre-entered values and you can specify in which field the input dialog will start. You can control the labels for the input fields: align them left or right (close to the input fields) and specify their color to be black or grey.

Show values from a second value list in popups

With Troi Dialog plug-in you can display a big input dialog box, in which the user can type (or edit) long pieces of text. You can specify how many characters the user needs to type before buttons are activated and also the maximum number of characters allowed. Moreover, you can prefill the text, set the size of the window, choose the title for the dialog and give it a standard icon or your own icon.

Use keyboard shortcuts in edit fields

With Troi Dialog plug-in you can display a list dialog box, from which the user can choose an item. Note that the OK button is disabled until the user chooses an item. The list dialog box is completely customizable, including setting icons.
Using the switch -AllowMultipleSelection in the ListDialog function will allow the user to select multiple items from the list. Command-a (macOS) or control-a (Windows) can be used to select all items. The selected items are returned separated by the pipe character. You can also preselect multiple items.

Have the results of the dialog put into fields without parsing

We’ve added functions to make it easier to put the data entered and the number of the button clicked by a user into separate fields: ready for further use!

With Troi Dialog plug-in you can show a flash dialog that will stay visible only for a fixed amount of time, for example 4 seconds. Great to give extra instructions to a user, without the user having to dismiss the dialog. You can specify a countdown text to be displayed at the bottom of the dialog, for example the text “This flash dialog will dismiss in <secs> seconds”. The plug-in will substitute <secs> with the number of seconds remaining.

For lengthy operations you can show a progress bar. Customize it with a standard or your own icon.

Schedule the display of notifications

Troi Dialog Plug-in lets you display a (local) notification on screen (and in the notification center), even when FileMaker is in the background or not running. This way your user can work in a different application and be notified for example when his report is ready. You can also choose to have a script triggered when the user clicks the notification, for example taking him to a specific layout.

The Show Alert Dialog script step lets you display an alert dialog to the user. This dialog has a main message and an optional extra and longer informational text, displayed in a smaller font. You can add up to 4 buttons and an (optional) custom title and custom icon. On macOS 11 (Big Sur) and later, the alert will be shown with a card-like user interface, with most content center aligned. Also note that in this case buttons can be shown vertically and you can show your custom icon as a small badge to the warning (exclamation) icon.

Real dialogs that you completely control

Position the dialog box anywhere on the screen

You can state precisely where you want the dialog box to appear on the screen. The plug-in will make sure the dialog remains visible even if your coordinates are outside the screen’s reach.

Set the text for the dialog title bar

Giving your solution that extra quality!

Add standard and custom icons to the dialog box

You can add a standard icon or your own icons, in standard size or extra large. Custom icons from a PNG image, including transparency, are supported.

You are free and invited to test the plug-in before you pay. Troi Dialog Plug-in is fully functional in demo mode, it will only stop working after 5 hours of testing. Download your copy here.

Troi Dialog Plug-in 11 adds a new switch “-AllowTallerDialogs” to the Dial_ Dialog function. With this switch the dialog will grow taller depending on the length of the prompt text.
We added a “-MonospacedFont” switch to the Dial_InputDialog function: when you add this switch the input and popup fields will be shown in a monospaced (fixed-pitch) font. The same switch was added to the Show List Dialog script step and the Dial_ListDialog function: when you add this switch the list items will be shown in a monospaced (fixed-pitch) font.
The Dial_Version function has a new “-GetStartupRegistrationLog” switch. This will return a text log of the plug-in’s registration process at startup time of FileMaker Pro. When you have problems registering the plug-in, you can see if the payment certificate was found and if a valid registration code was found.
We tested this version and made it compatible with Claris FileMaker Pro 19.6, Windows 11 Version 22H2 (2022 Update) and macOS 13 (Ventura). We also added initial compatibility with Claris Pro 40.1.1.

Please see the Version history below for a complete list of improvements and bug fixes in this and earlier versions.

NOTE Only steps that perform an action have been added as a script step. Functions that have no side effect (like for example Dial_GetButtons) are only available as an external function.

We offer the following licenses for Troi Dialog Plug-in:

developer license: this license is meant for FileMaker developers, who want to include the plug-in with their database(s) or custom app(s) and distribute it to their end-users. Each of your end-users may use the plug-in with up to 25 users (contact us if any of your customers has more than 25 users). The number of organizations you distribute the plug-in to and the number of databases or apps you distribute it with are not limited. Works on FileMaker Pro and FileMaker Pro Advanced, including with files hosted by FileMaker Server.
Go to the developer license page for more info.

Below are a few things our users had to say about Troi Dialog Plug-in:

Timebox Solutions Ltd. use Troi Dialog Plug-in with their TBX Postcode Plug-in. They include it with their product “as it makes a very good demonstration of one way to implement postcoding functionality using AFD Postcode Plus. We are happy to recommend Troi Automatisering’s plugins and have used many Troi plugins for many years.”

“And may I say that I LOVE Troi Dialog, it just keeps getting better and better. My solution for music and art schools, StudioSchool Pro, relies heavily on it for a variety of custom dialogs handling everything from payments and refunds and to sort selections for label output.”
Will Loving, Human Data Design

“Thanks very much for sending this version of the plug-in and answering my query so quickly. I’ve given the plug-in some testing and as far as I can tell it has fixed my problem. I’m extremely pleased with your level of customer service. Keep up the great work.”
Dan Burgess, Information Systems Administrator, South of England Open College Network, University of Brighton

“Troi Dialog was the first and it’s still the best. Now we’ve got a bunch of me-too software coming out four or five years after Troi led the way. They’re going to have an awfully tough time matching Troi’s record for stable code, stellar support, and indispensable features. I literally will refuse to work on any major FileMaker project without Troi Dialog. I trust it completely to be a key part of my solutions, and going without it is simply an incredible waste of time.”
Jay S. Levin, Turtle Solutions

“If you’re looking to produce a professional-looking solution using FileMaker, then this dialog box plug-in is a must-have.”
Richard Dyce, MacUser UK

“The Troi Dialog plug-in has lots of features making it worth every cent of the US$29.”
Kent Lendrum, HOD Computer Studies, Mount Maunganui College, New Zealand

“Buying the Developer’s License for the Dialog plug-in was the best FMP-related investment I’ve ever made!”
Kieren Richard MacMillan, head database developer of kierencom, Toronto, Canada

“I have been using your Troi Text, Dialog and ClipSave plug-ins with great success. Thank you very much.”
Doug Rider, FileMaker Pro database developer of InterRiderWork

“This new version of the Dialog Plug-in is great. Thanks and I love it!”
Matt Klein, Small Business Computers of New England

We are still collecting more comments. If you have any remarks on the Dialog Plug-in please send us your comments. Thanks! 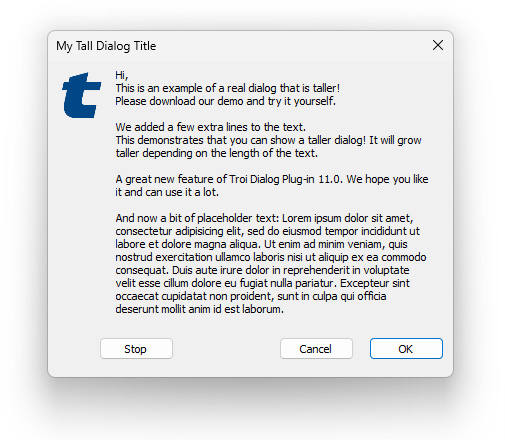 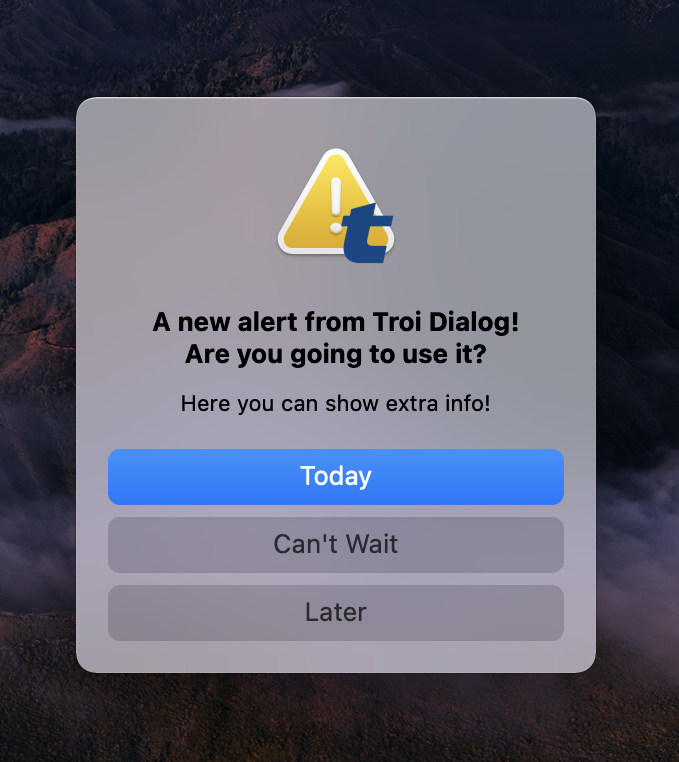 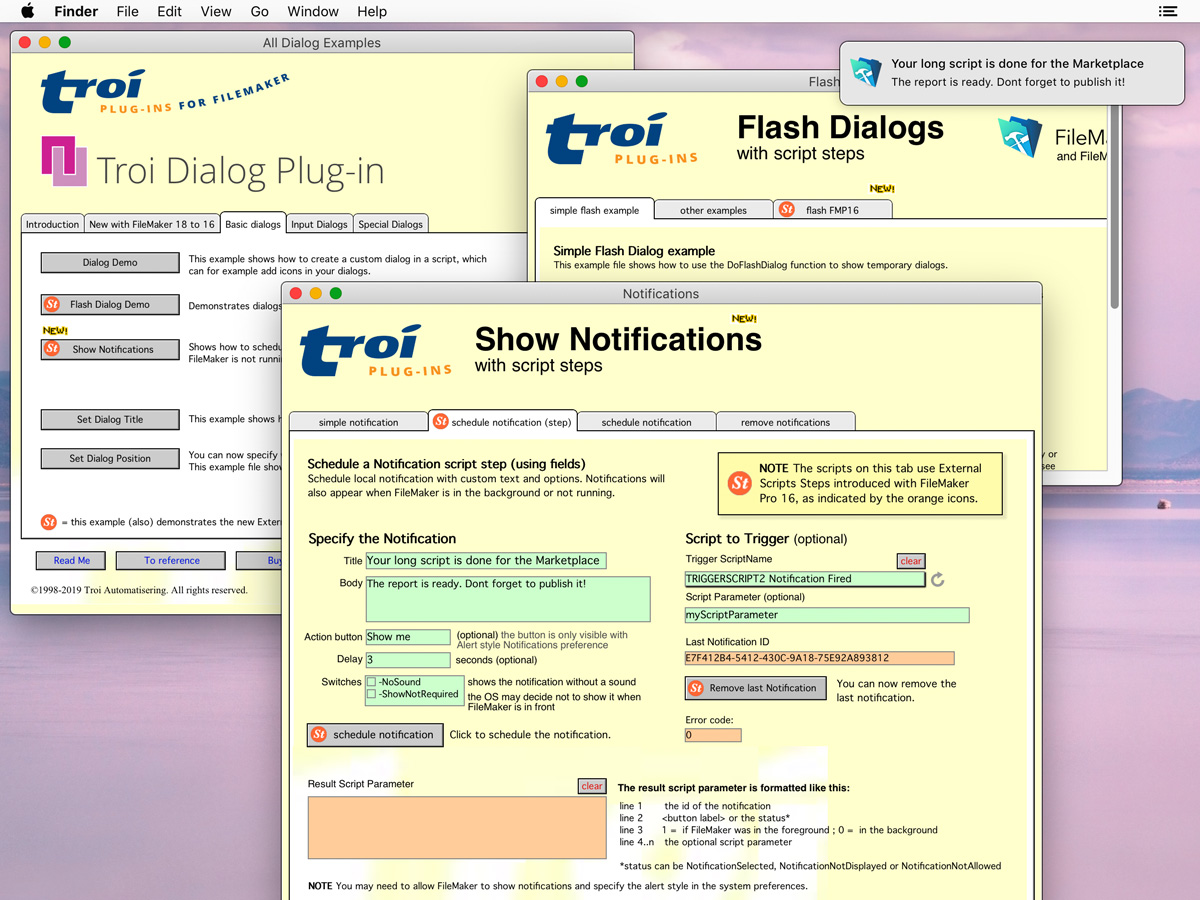 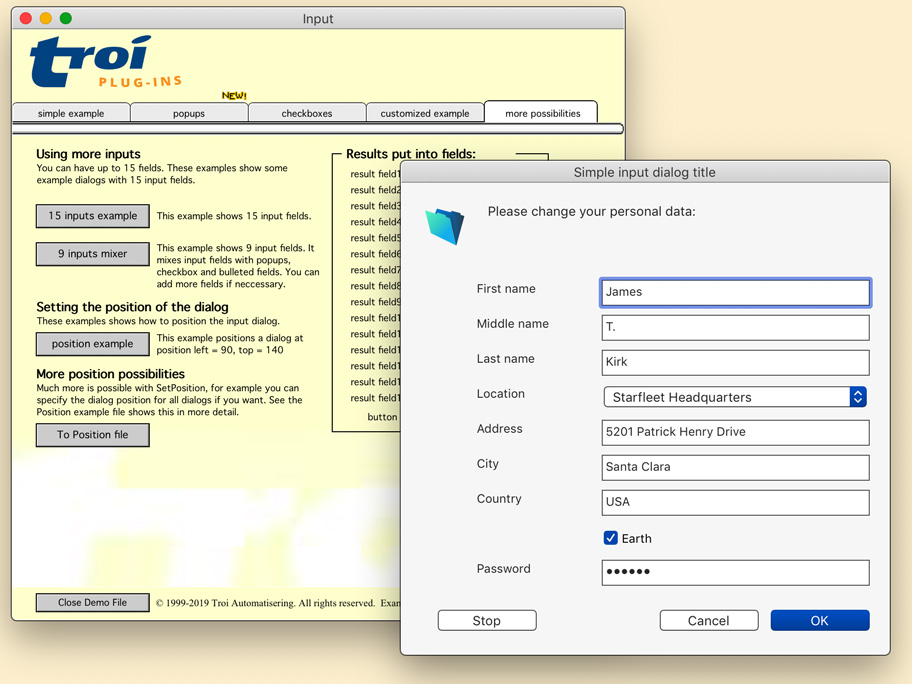 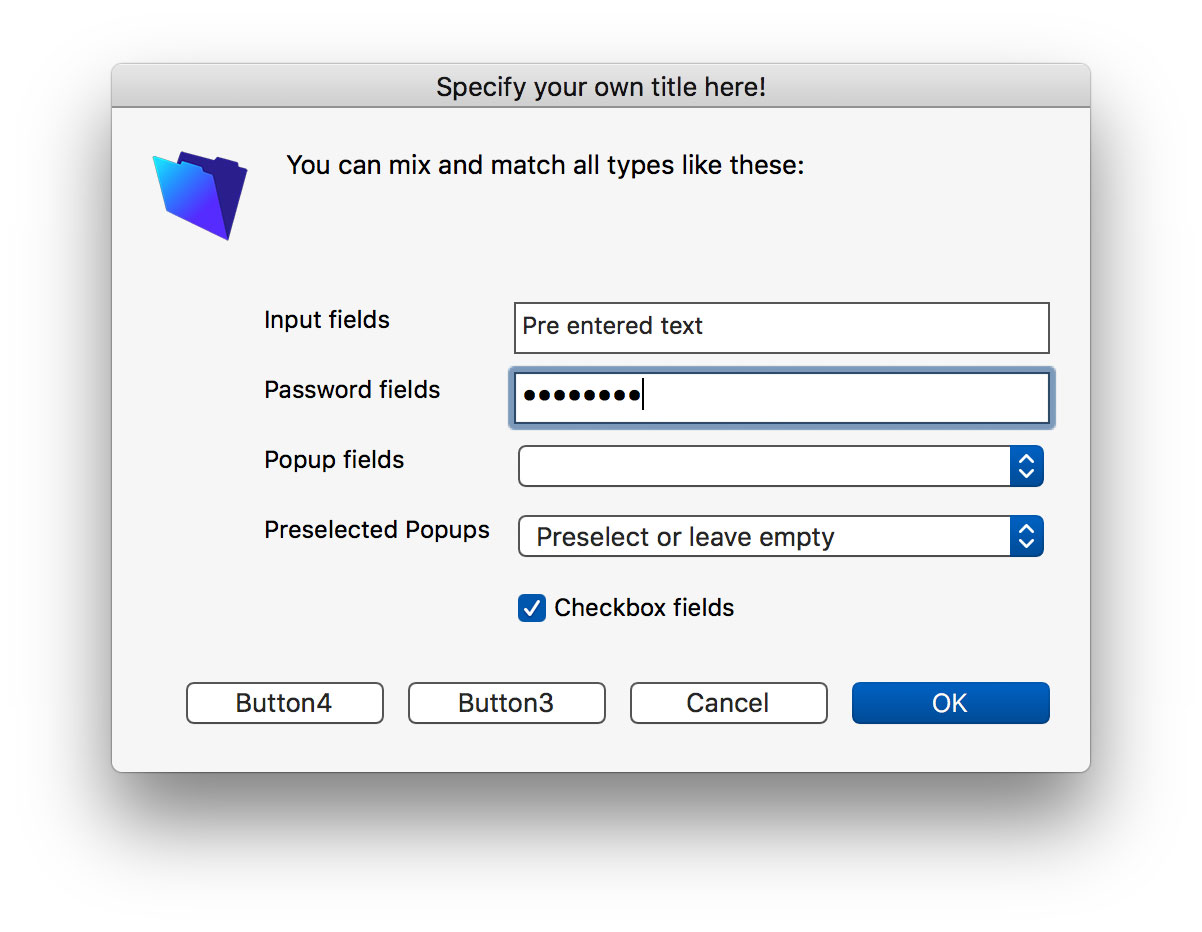 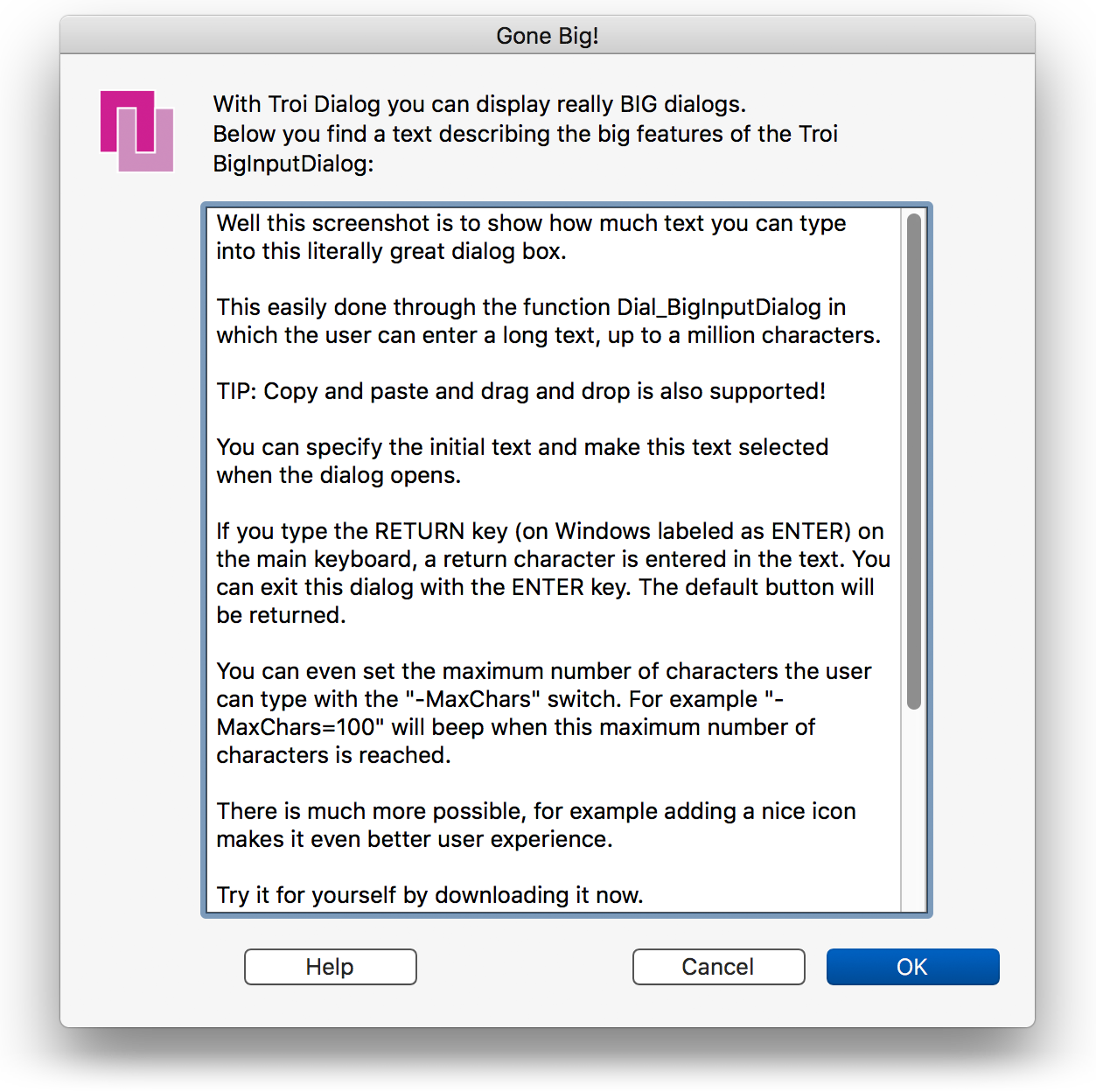 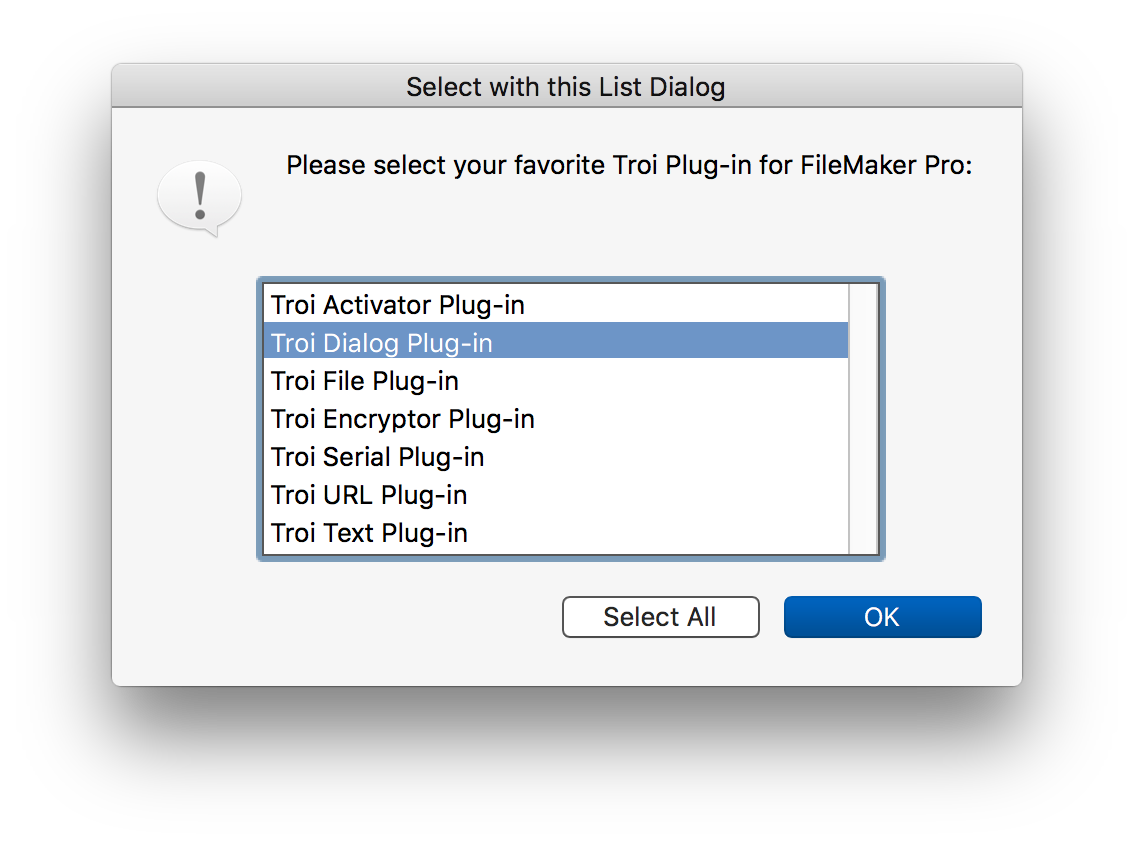 Dialog Plug-in FAQ
See a list of Frequently Asked Questions about this plug-in.

Second Value List in a dialog pop-up
How to display an input dialog with a popup, which displays the values of a second value list, while returning the chosen value from the first list.

Give your database that extra quality by giving users the best feedback!