What is Troi Activator Plug-in?

Troi Activator Plug-in 4.5.1 is a maintenance release and has the following fixes and improvements:

Licenses cost US$ 89 per user. Details on developer licenses and multi-user discounts can be found on the Activator Plug-in page. You can order licenses from our shop.

The 4.5.1 version works with the 4.5 version of the registration. If you bought a license for a pre-4.5 version on or after June 14, 2016 the upgrade is FREE! Eligible users have been sent a new registration string in September 2017.

Upgrades from licenses bought before June 14, 2016 are available from US$ 39 per user. Upgrade prices for other licenses can be found in the shop. You can order upgrades there.

Until the end of 2017 we offer a 10% discount on all Troi plug-in licenses! Order your new licenses and upgrades for any of the Troi plug-ins at the online shop and enter the following coupon code upon checkout:
END2017SALE
The coupon code is valid until December 31, 2017. 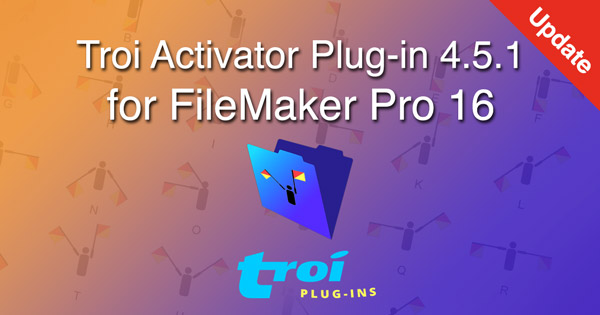