Create a data file and set its contents

FileMaker 18 adds the new script steps ‘Create Data File’, ‘Open Data File’, ‘Write to Data File’ and ‘Close Data File’. You can use these to create a new (text) file, which you can then open and write data from your database into. After that you need to close the file again.

Write data to an existing file

FileMaker 18 adds a new ‘Set Data File Position’ script step which lets you set the position (in number of bytes from the beginning of the file) at which to start reading or writing data. When you next write data to the file with the ‘Write to Data File’ step, existing text at the read-write position in the file is overwritten by the new data. If you want to append text to the end of an existing file, the steps would be:
Get File Size (to find the number of bytes for setting the read/write position at the end of the file)
Open Data File
Set Data File Position (to the number found by the Get File Size step)
Write to Data File
Close Data File

Get the contents from an external file

FileMaker 18 adds the new script step ‘Read from Data File’ to read the contents of an external file into the database. As with the ‘Write Data to File’ step, you have to first Open the file and after reading Close the file. To read only part of an external file you can use the ‘Set Data File Position’ to indicate at which position to start reading and you can specify the number of bytes or (for UTF-16) the amount of Unicode code units to read.

With Troi File Plug-in you can use the TrFile_GetContents function to get the contents of a file. It also allows you to specify the starting position and the number of characters to get. Moreover, you can specify the character encoding of the text to be read and you can convert any line breaks in the data to the line break FileMaker expects: this means that CRLF, LF and CR will all become CR (carriage return).
If you want the user to determine which file to read the contents from, you can alternatively use the plug-in’s Get File Contents with Dialog script step. This will show the user a file selection dialog and return the contents of the selected file, all with one easy script step!

Here is a list of other file script steps introduced in FileMaker 18, with their equivalent steps or functions in Troi File Plug-in:

Troi File Plug-in adds no less than 80 functions and 38 scripts steps to work with files and folders outside the FileMaker database. For an overview of all functions and steps added by the plug-in please see the online help page. Or download the fully functional demo version from the File Plug-in web page and see what you can do with it right away. 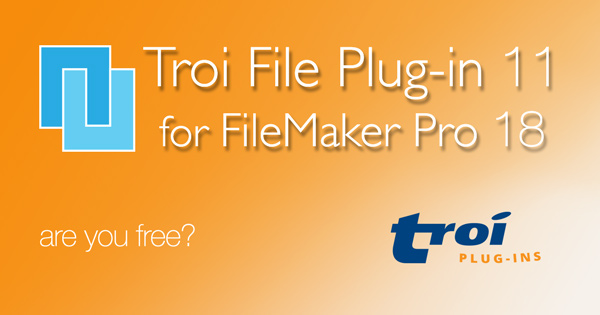