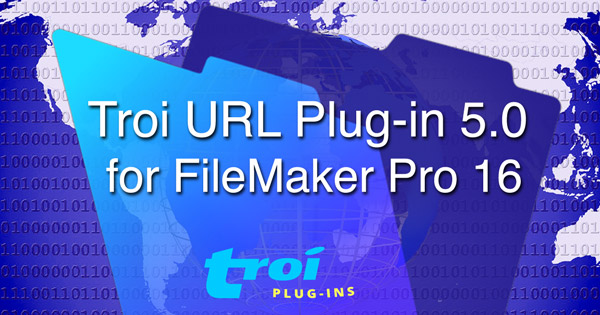 What is Troi URL Plug-in?

Troi URL Plug-in can help you fill in forms on the Internet, all from FileMaker Pro. It also retrieves data or images from web sites.

We rewrote Troi URL Plug-in for FileMaker 16 and it now has the following new functionality:

Version 5.0 adds the following new features when running in FileMaker 16:

Apart from these additions we fixed several bugs and made various further improvements. More detailed information on all changes and improvements implemented in Troi URL Plug-in 5.0 can be found on the URL Plug-in page.

A fully functional demo version of Troi URL Plug-in 5.0 is available on the URL Plug-in page.

Licenses cost US$ 79 per user. Details on developer licenses and multi-user discounts can be found on the URL Plug-in page. You can order licenses from our shop.

Upgrades from licenses bought before May 24, 2016 are available from US$ 49 per user. Upgrade prices for other licenses can be found in the shop. You can order upgrades there.