Our serial port plug-in that gives FileMaker Pro easy and powerful access to external devices with a serial interface was updated today.

What is Troi Serial Plug-in?

Our customer Claus Lavendt of DataManix.com made a video demonstrating how to connect FileMaker Pro to a weighing scale. The video shows how you can automatically store the readings from a weighing scale in your FileMaker database with the help of Troi Serial Plug-in. “This plugin is great and very stable”, Claus said. You can watch his video here.

Version 4.5.1 is a maintenance update. In this version we fixed a bug in the Serial_Receive function, where in some cases not all data would be returned directly. We also updated the code in several places to make the plug-in more robust and made several small improvements to the example files.

More detailed information on all changes and improvements implemented in Troi Serial Plug-in 4.5.1 and earlier can be found at: www.troi.com/software/serialhistory.html.

A fully functional demo version of Troi Serial Plug-in 4.5.1 is available for downloading at Troi’s web site at: www.troi.com/software/serialplugin.html.

A cross platform developer license costs US$ 999. Details can be found on our web site. You can order licenses from our web site.

Upgrading to version 4.5.1 is free and recommended for all users of version 4.5: version 4.5.1 works with the same registration as the 4.5 version. Users who bought a license for Troi Serial Plug-in on or after May 12, 2015 are entitled to a free upgrade to version 4.5.1. Eligible users have been sent a new 4.5 registration. Contact us if you have not received yours.

Upgrades from a cross platform developer license bought before May 12, 2015 are available from US$ 499. You can order upgrades from our web site. 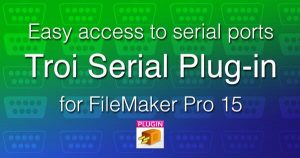