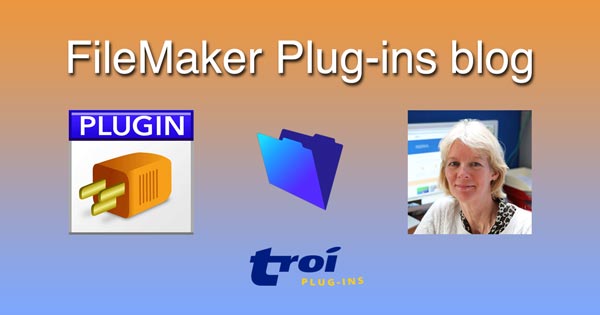 Adding content, such as an image, audio/video, PDF, or a file of any type, to a FileMaker Pro container field can be done very easily by dragging and dropping the file on the container. However, when you drag a file into a container field, FileMaker Pro always embeds* the data in the field. But what if you only want to store a reference to the file? In that case you can use Troi File Plug-in‘s Drag and Drop function.
END_OF_DOCUMENT_TOKEN_TO_BE_REPLACED
Troi Plug-ins In FileMaker Plug-ins blog

FileMaker Pro 16 has no bottom 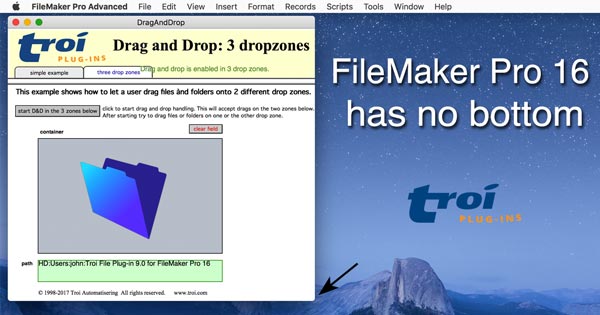 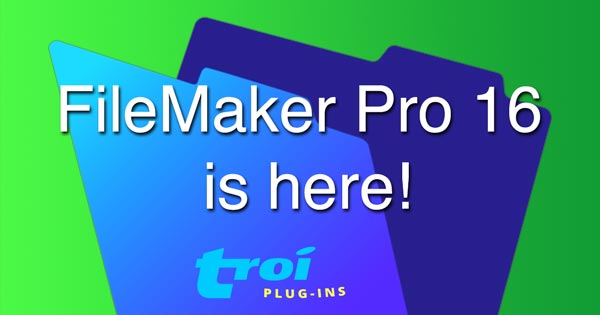 Congratulations to FileMaker, Inc. on the release today of version 16 of the platform.
END_OF_DOCUMENT_TOKEN_TO_BE_REPLACED

Get Icons into FileMaker Pro

With Troi File Plug-in 8.6 for FileMaker Pro you can easily add the icons of files on your disk to your FileMaker app.

To do this you use the TrFile_GetIcon function. It can create icons in sizes varying from 16×16 to 1024×1024 pixels and even with double resolution for retina screens.

END_OF_DOCUMENT_TOKEN_TO_BE_REPLACED

The newly released Troi Text Plug-in 4 for ‪#‎FileMaker‬ Pro 14 adds customizable (or is it customisable?) spelling functions per field.  You can implement this from a calculation, for example in a script or in a calculation field. You can also ignore, learn and unlearn words, from a script.

Can you parse out XML data in FileMaker Pro in one step?

If you regularly have to work with XML formatted data in FileMaker Pro®, getting the relevant parts of that data, and putting it into text fields can be a daunting task.
And you would probably say it is impossible to get a node of the XML out in one step as it would need a lot of script steps. But that is not the case if you use a plug-in.

Yes, it can be done!

It can be done if you install Troi Text Plug-in. This plug-in adds a function TrText_XML( ) to your arsenal of tools.
This function allows you to easily parse out a node from XML in one step! Here is the syntax of this function:
TrText_XML ("-GetNode"  ; Node_to_get ; XML_data )
The function has three parameters: the first parameter specifies the action to take, in this case to get a node from the XML. The second parameter specifies which node you want to get. Finally the third parameter is the XML data you want to parse.
END_OF_DOCUMENT_TOKEN_TO_BE_REPLACED

Plug-ins are going to Las Vegas

If you want to meet FileMaker Plug-in makers in person: Troi Automatisering is going to the FileMaker Developer Conference in Las Vegas this year.
We will have a booth at the Product Showcase and hope to show you all the exiting new stuff we have with the Troi Plug-ins for FileMaker Pro. The FileMaker DevCon 2016 will be held July 18-21, 2016 at The Cosmopolitan of Las Vegas, Nevada.
We hope to see you there!

With about 200 people the german developer conference is being held from 8 October until 10 Oktober.

Troi is proud sponsor of the conference. We also prepared a leaflet with our plug-ins in German:
You can the see the PDF of it here:

Today we released an updated version of Troi File Plug-in, our plug-in for manipulating external files and folders directly from FileMaker Pro. This is a maintenance update, which has a few bugfixes and improvements in the Search, GetDate and Metadata functions. Upgrading to version 8.0.1 is free for all users of version 8.0.

Today we released Troi File Plug-in 8.0, which adds support for 64-bit architecture with FileMaker Pro 14. We rewrote the plug-in so the TrFile_SelectFileDialog, TrFile_SelectFolderDialog and TrFile_SaveFileDialog functions are now available for you to use too.