What is Troi Dialog Plug-in?

Troi Dialog Plug-in is a very powerful tool for displaying all sorts of dialogs in FileMaker Pro. The text of the dialog and of the buttons can be created dynamically by using a calculation or a script step. All from within FileMaker you can:

What is new in version 7?

We rewrote Troi Dialog Plug-in for FileMaker 16 and it now has the following new functionality:

Version 7.0 adds the following new features when running in FileMaker 16:

Apart from these additions we updated the Dial_PresentImage function for 64-bit (Mac OS only) and fixed a problem in the Dial_ListDialog function. More detailed information on all changes and improvements implemented in Troi Dialog Plug-in 7.0 can be found on the Dialog Plug-in page.

Licenses cost US$ 59 per user. Details on developer licenses and multi-user discounts can be found on the Dialog Plug-in page. You can order licenses from our shop.

Upgrades from licenses bought before October 1, 2016 are available from US$ 35 per user. Upgrade prices for other licenses can be found in the shop. You can order upgrades there. 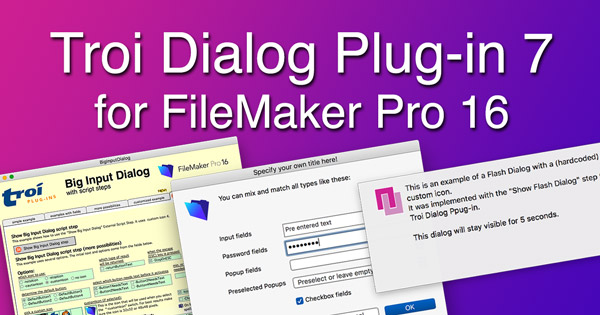